Time for a study abroad adventure, which means TIME to get back to blogging! It’s funny to think that I started blogging when I was 16 for a competition I took place in within my summer study abroad program in Biarrtiz, France for three weeks, and since then it has blossomed into a fun, creative life-long hobby and outlet for me.It seems like so long ago, but when I read those posts from 2013 ( my blog was adventuresaufrance.wordpress.com) it brings me back to all the sights and details of my experiences as if I’m reliving them all over again, which is why I love to blog! It’s like an online collection of memories, which is useful cuz I have a shitty ass memory lol.

For this four month adventure I’m living in BARCELONAAAAAAA! I’ve been here for three nights and two days now and I already know I’m going to absolutely THRIVE. Tapas, paella, the beach, clubs, Spanish music and espadrilles wtf else more could you ask for honestly.

My two flights were not bad and on the first I sat by a lovely German couple and made the woman try a bloody mary. She seemed scarred from it, but tbh I don’t blame her bc the flight attendant made them strong af and used shitty airplane tomato juice and they also didn’t have tobasco or any spices so we were basically drinking sky vodka with shit tomato puree lmao OF COURSE that would be my first legal drink. I also decided that I turned 21 the day I left for Barce because the minute I stepped on the Lufthansa plane I was legal in Europe and I turn 21 in Barcelona, so I return to the states a free woman halle gdam lujah.

View from our living room window!

My apartment is incredible and the amenities and appliances are ten times nicer and newer than the ones in my NOLA house, me and my housemates really lucked out with the amount of storage and space we have, not to mention a laundry machine that ALSO works as a dryer like who has even heard of such a thing in Europe. There’s also poke and TONS of good sushi, so I honestly don’t know what’s going to make me want to leave by the end.

The first day I got in and arrived at my apartment at around 5pm. I unpacked, met my housemates and then we did a brief grocery shopping trip to a local market and chatted around the couch with wine for a couple of hours before bed. We were all very happy we decided to have a laid-back wine night instead of going all out on the first evening because we had an early, long orientation the next day at CEA (our program). Orientation lasted a couple of hours and then me and Sarah, another Tulane gal went out exploring the Gothic Quarter with Jelis (one of my housemates) and Sarah’s housemates Danica, Kristine and Shea. We got gelato and admired all of the charming old castle-like buildings that contrasted the Zaras and mangos and shoe shops on the other sides of the streets. The Barrio Gotico is awesome. I didn’t bring my camera to orientation so I don’t have any photos from that area yet, but will soon. We had an awesome dinner that night at La Cava in the Eixample, the neighborhood we all live in. Emma, Taylor and Caroline (three of my housemates, they so cute)

The Eixample is the most modern area of Barcelona and is set up like a grid, which makes it very easy to navigate once you get the hang of it. It is filled with coffee shops and restaurants and is the more affluent, upscale part of Barce. We’ve found that it’s a great place to live because it’s not as cramped and touristy as the Gothic Quarter, thus is not prone to as many pick-pocketers and questionable people and is quiet at nice, which great after a long night out in da DISCOTECHASSSSS! 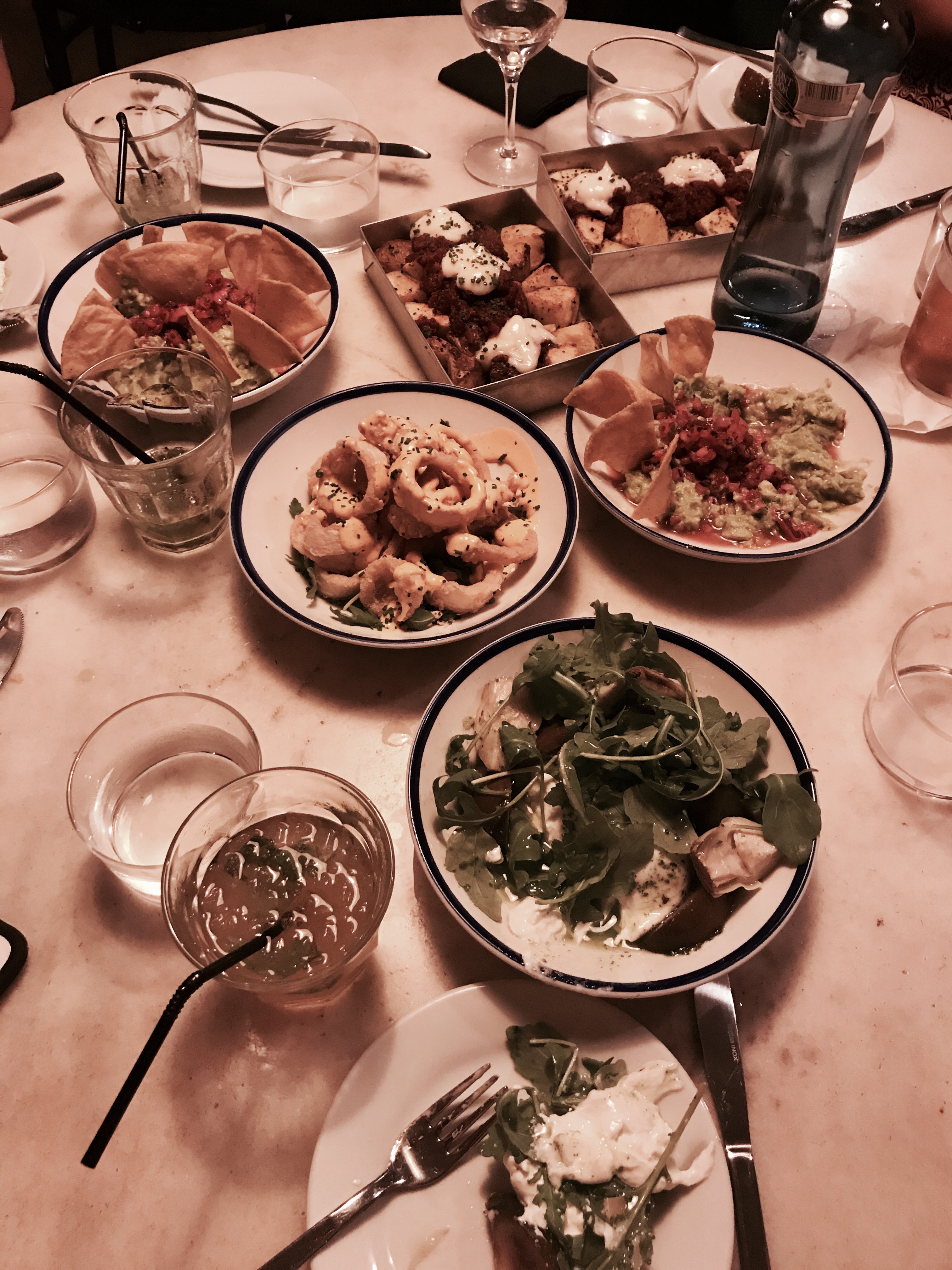 After some ceviche and guacamole and burrata and mojitos at La Cava we headed to Bling Bling, a popular club which was supposed to be poppin’, and it was, TOO poppin. We waited in line for like 45 minutes until finally reaching the front and it suddenly became a huge ass mob and me and Olivia (also from Tulane) were being suffocated to death for about 20 minutes and couldn’t even get out of the line if we wanted to. By this time it was later in the night, the mojitos were long out of our system and we all had no desire to get back in line so called it a night. A bit of an annoying start but we knew we had 4 more months to stay out until the sunrise and enjoy the clubs.

The next day we did a bus tour with CEA and visited La Sagrada Familia, the gorgeous church in l’Eixample, saw a beautiful view of the full city from the hills and visited the water in the Barceloneta area. Afterwards Jelis and I walked back to our apartment and stopped for tapas and a glass of wine for a late lunch (or at least I did and Jelis sat with me).

That night I met up with my Tulane gals who were in town for my friend Sophia’s 21st birthday!!!! I met up with them at their air bnb and we had an INCREDIBLE dinner at a small, quaint tapas bar called Sense Bistro in the quarter. The goat cheese croquettas, sauteed mushrooms and vegetables were incredible. The waiter gave us free limoncello shots for Sophia’s birthday and we headed to Opium, a super popular club by the water. 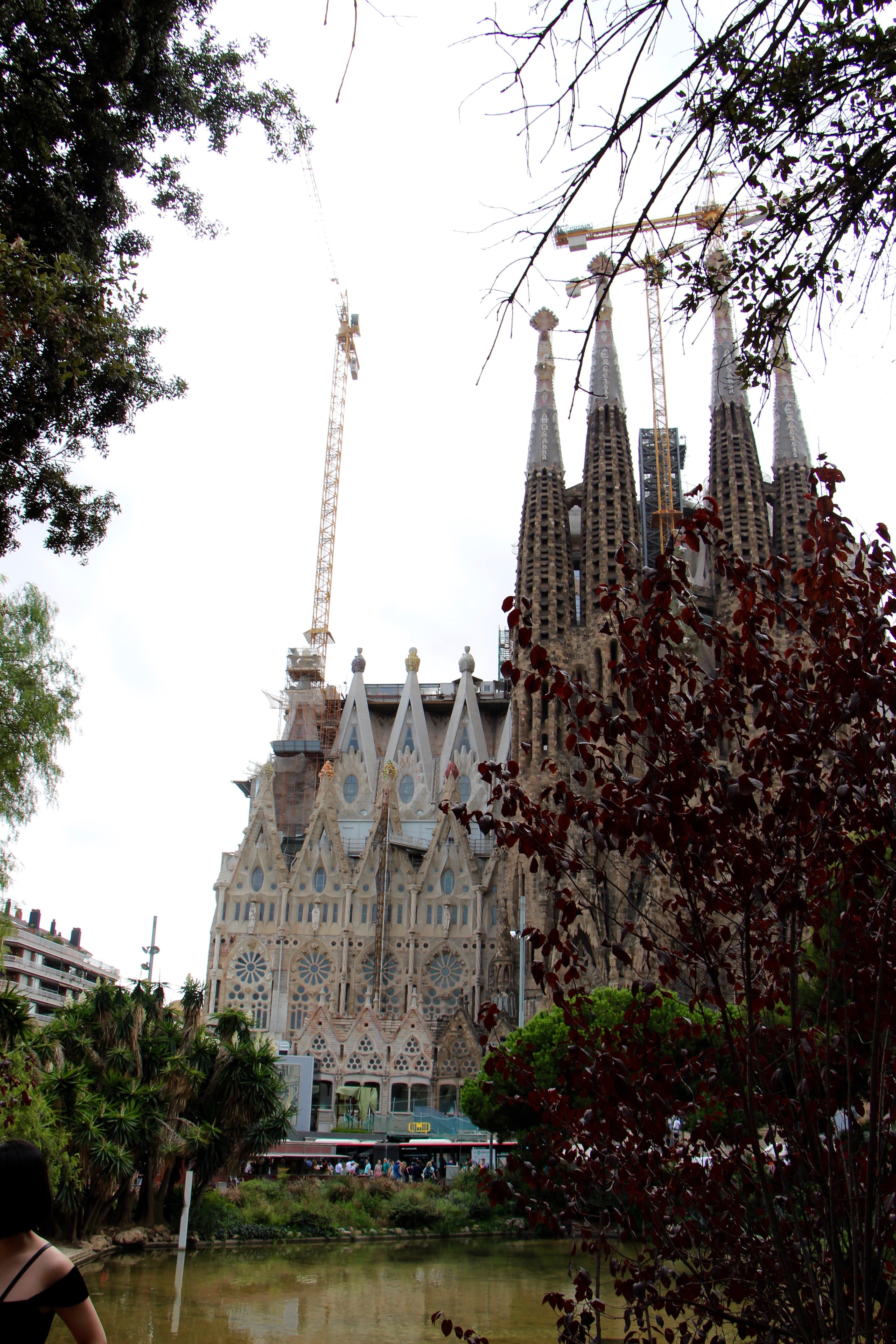 La Sagrada Familia’s in the long long process of getting a face lift and apparently some like 200 foot Jesus is going to be placed on the top around 2026? Down by da seashore. This lil boat port reminds me of my visit to San Sebastian, so beautiful.

Sydney, Amanda, Sophie and I woohoo!

Yassss I can’t wait to explore all the clubs here bc they play such awesome electronic music and everyone just dances for hours!!! So fabu

Opium was lit. af. Liv luv opium wow we’ll be back, we’ll be back. Deep haus and fab music for ages and we left around 5ish. We trotted to the metro, struggling with the pain our poor feet were enduring from walking and dancing so excessively in heels. We arrived home at around 5:45ish. It was an incredible first REAL night out and we decided we’d let ourselves sleep in.

And we did. Until 4pm. lol. I guess the time change and this new concept of when to leave a club (not until 5 or 6am) was not something our body could simly adjust to. I didn’t feel bad tho bc Jelis, Emma, Olivia and Sarah all did the same thing unintentionally. Jelis, Emma and I decided to get up and take a nice stroll to get 6pm breakfast, which we did at Granja Petitbo, a really cute hip cafe in l’Eixample. They still had the brunch menu available, so clearly late starts are not unheard of in L’Espange lmao.

I’m LOVING the amount of color and design that this city embraces in it’s architecture. The fashion, the buildings, EVERYTHING is just poppin’ ! 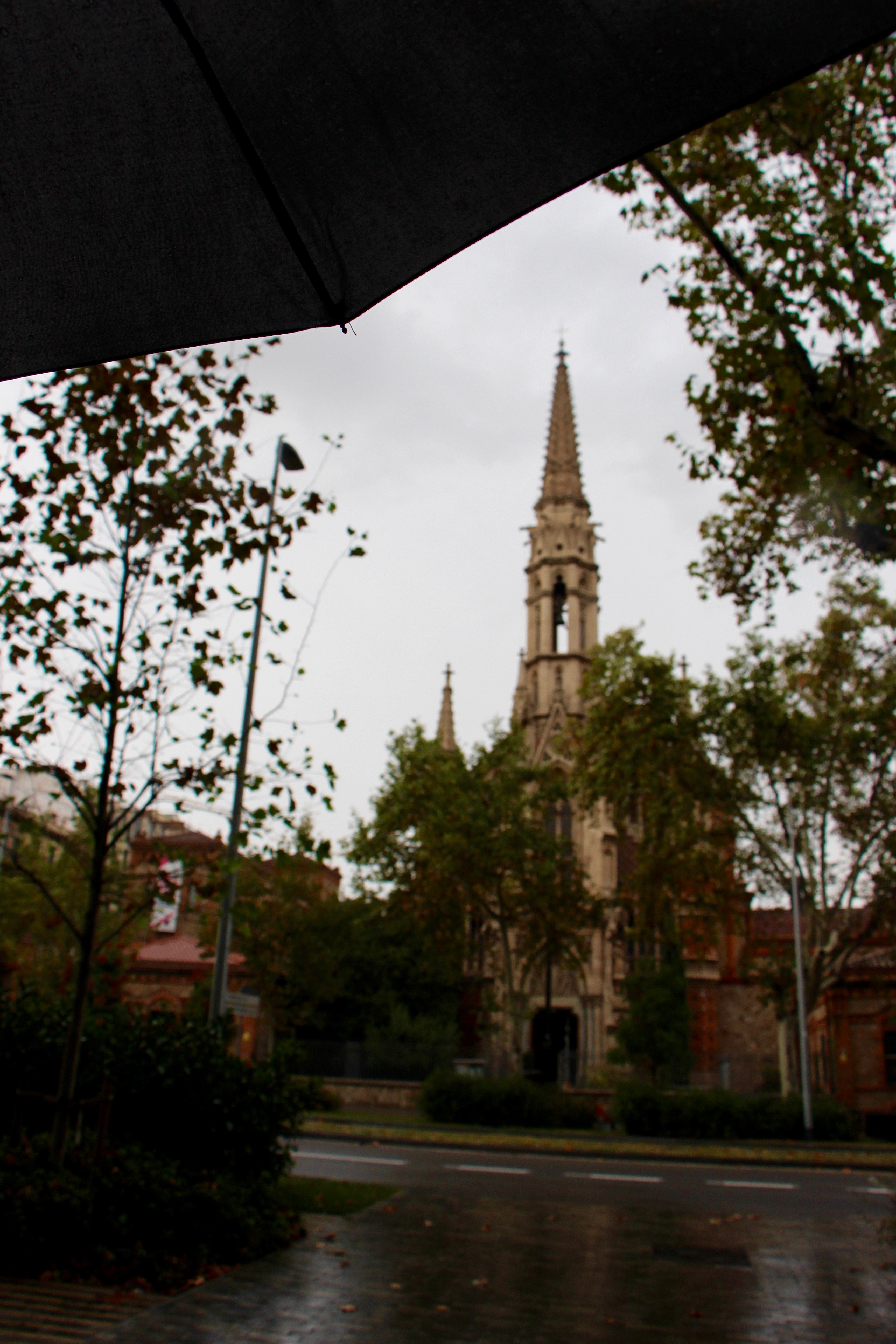 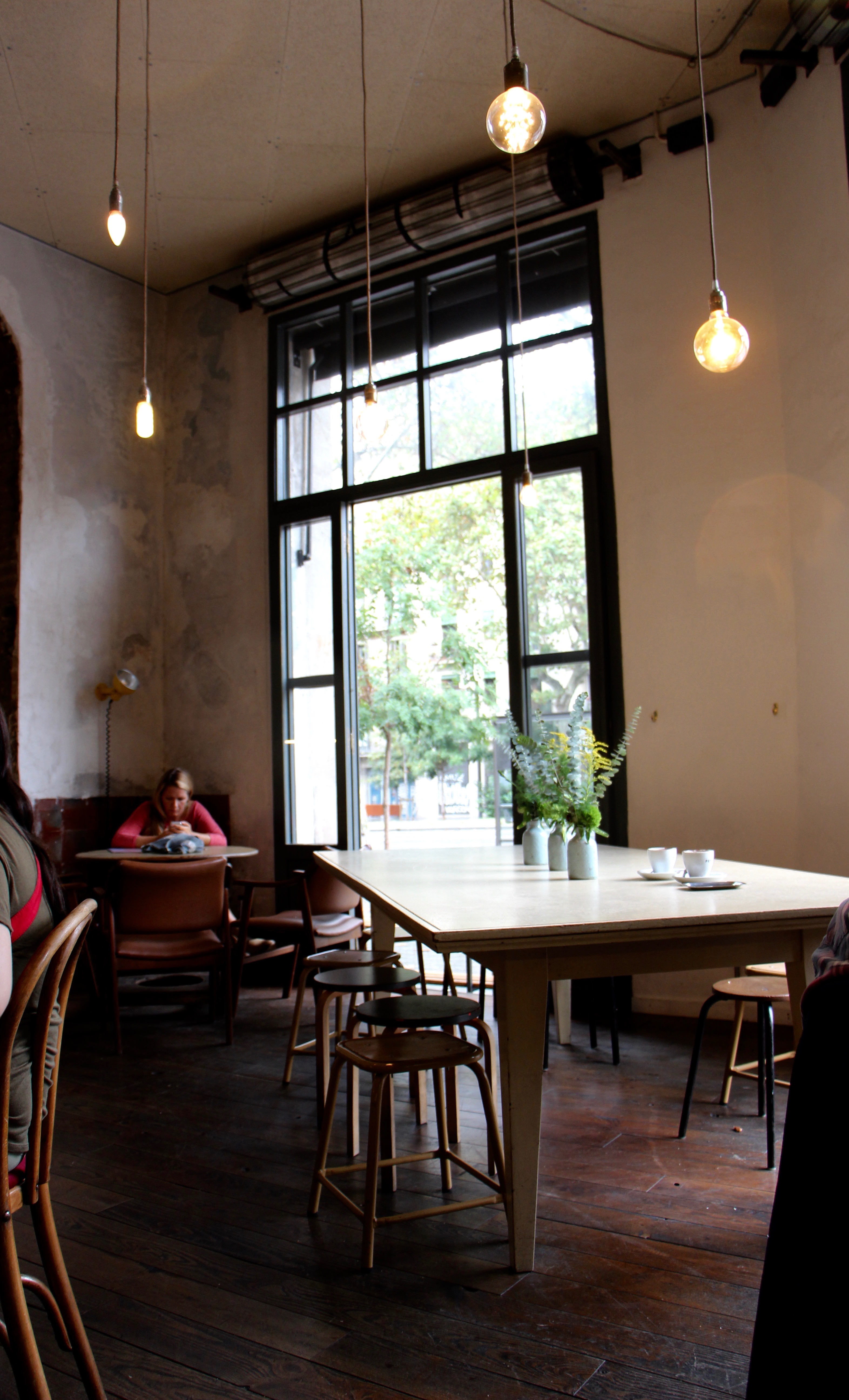 Inside of the quaint, cozy Granja Petitbo. lots of indie ass mofos here, you gotta luv it

Emma and her macchiato.

Delish caesar and lasagna that Emma and I shared and Jelis’ pulled pork sandwhich. T god I live with not picky eaters.

I’m loving the endless amount of cheap empanadas, the bright colorful Asics and Reeboks and Nikes that roam the streets, and the incredibly friendly Spaniards we have encountered who have gone OUT of their way to help us and practice Spanish with us! I’m so pleasantly surprised.  My two months of DuoLingo Pre-barcelona as well as making a conscious effort to use and practice Spanish with locals is actually making a big difference and I am learning the language so quickly!!! Knowing French pretty well has also helped immensely and I’ve found that many people here know French if they don’t know English, so I’m getting to practice Spanish AND French. I love learning languages it’s so great wow. 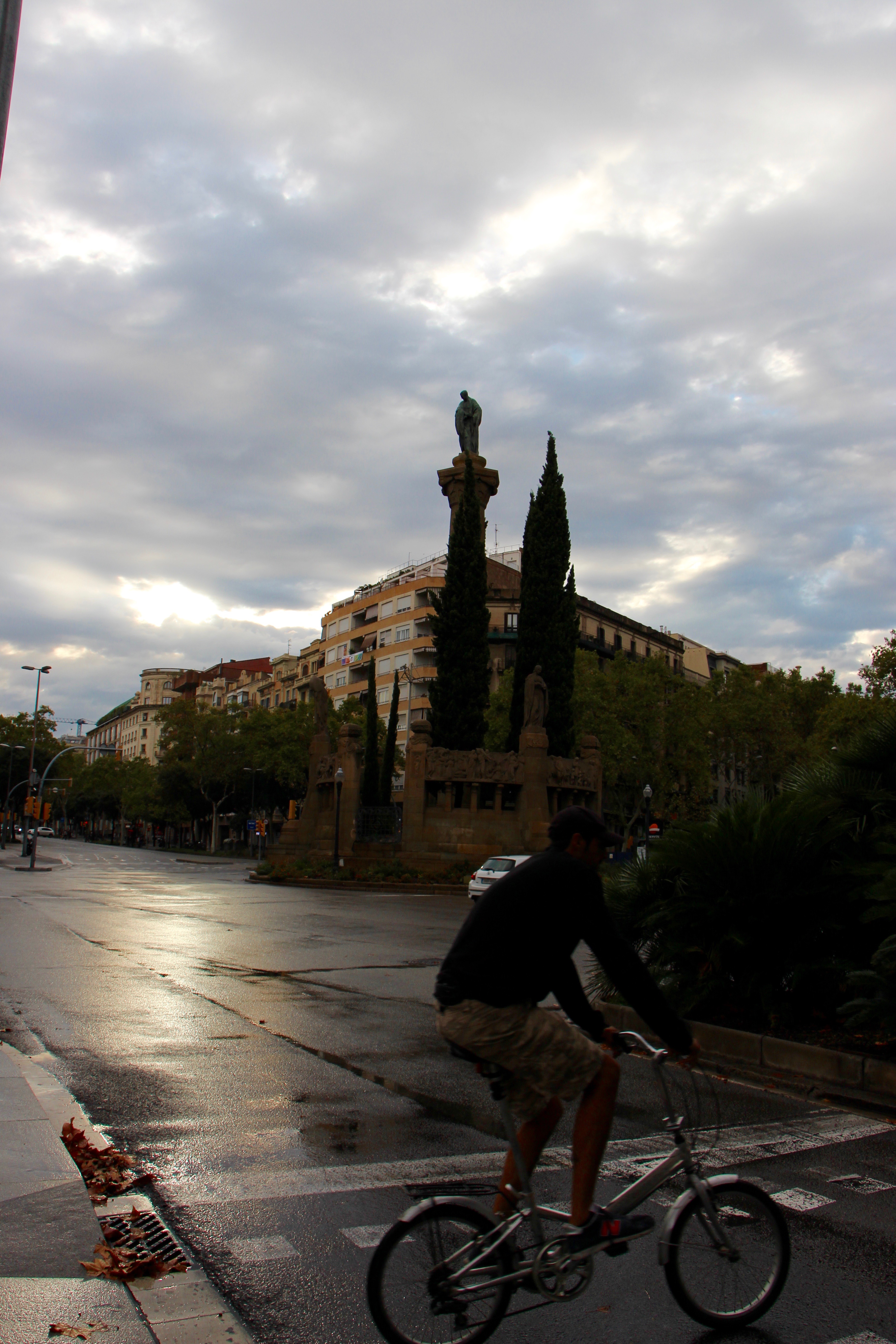 Just a gorgeous church we encountered on our walk back to the apartment. Like wow Barcelona you are so gorgeous

I am very much not a fan of the cultural norm that is INVASIVELY staring at strangers for extended periods of time, and continuing to do so even when I give them strange looks in response. I will never understand why this is a thing. Also don’t enjoy having to pay for water at every restaurant but all of this incredible food makes up for it. Also pick pocketing is such a thing here it’s INSANE AND SCARY we saw two older women get pick-pocketed in the quarter on our FIRST DAY and the culprits saw that we witnessed it and tried to shoo us away. So horrible.

This was a pretty long summary post so I’ll end it here, but I’m SO happy and grateful to have the opportunity to just indulge and enjoy this city, meet the awesome outgoing people that I have been so far, and to be able to go on countless adventures with friends new and old exploring new cities and just livin’ life. Buenas noches mis amigos ciao ciao!!!!

One thought on “¡ vamos a Barca ! my study abroad adventure begins”