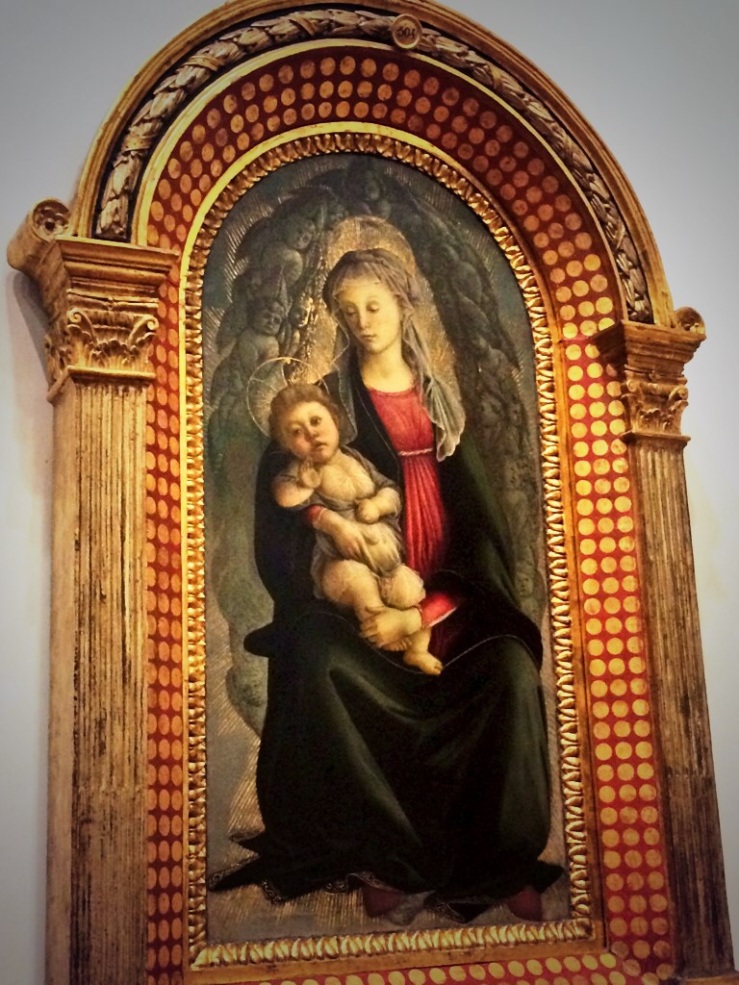 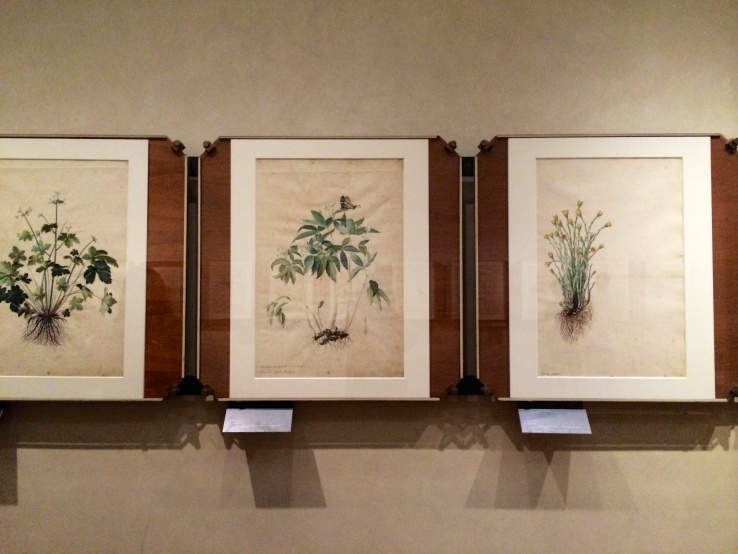 I am sitting on the train headed to Rome, sad to leave Florence and all its charm. The past two days we’ve spent here have been incredible, my mom and Nancy are having some sort of mid-life crisis and keep talking about finding a study abroad program for 40 year old women with three children. Not sure I have high hopes for that plan. On our first full day,

the day I FORGOT TO CHARGE MY CAMERA (GO ME!) we went to the Uffizi Museum which has one of the greatest collections of Renaissance art in the world. To clarify, imagine a museum full of pictures of Jesus with a baby body and sassy man face being cradled in his mama Mary’s arm’s as other women, men, and religious figures look to him for hope and the meaning of life. At least that is what it seemed like to me. Boy he was a sassy baby and always had this one hand raised up like he was dissing you or telling you to “talk to da hand”. But to be a bit more mature, (bleh) the art was really beautiful and the landscape painted in each peace was very rural and quaint, embellished in earthy colors and in other more grandiose ones, shiny gold and the prominent colors of red, green, and blue. Many pieces featured angels, (all of which I noticed were boys hmm or atleast I think). Many of them were quite flirty and lovey dovey with each other. I got quite a few pictures of some statues I thought were humorous due to the figures’ strange standing positions as well. Since the plaques beneath each piece of art/statue explained who the artist was and where it originated, I had to get creative by making up meanings for the pieces myself. I would’ve preferred to see a story that explained the context of each piece or the significance of certain things incorporated, but it’s okay I am pretty imaginative. I was hoping to find some sort of subliminal message in one of the pieces about the devil, antichrist, even the illuminati but no luck. Ah well they were all wimps because they probably would’ve gotten beheaded if society had agreed that they ever created something controversial/rebellios aka a piece of art that didn’t somehow honor Jesus/Mary/mythology. All in all I had a wonderful time exploring (as i love art museums but statues aren’t my personal fave) and be ready for a humorous/satirical blog post where I create stories for the characters in the art/statues and post pictures of them. Hopefully I’ll get a cackle or two.

Afterwards we went and got literally the best sandwiches. Holy mother of Moses I could’ve shoved the whole thing in my mouth at once it was so good, like DANG! It was basically the size of my face x2 and I got prosciutto (best I’ve ever had sooo sweet and delicate), fresh tomatoes and mozzarella, amazing bread, this incredible truffel ricotta (like the umami truffle burger ain’t got NOTHIN’ on it) as well as a delicious tomato spread. Oh and arugula how could i FORGET! It’s like the epitome of a foodgasm except I HATE that word and I don’t understand why people use it like its just so strange to me but literally that’s what it is. So after I attempted to eat the whole thing, which if I did I probably would’ve barfed, we headed over to a vintage flea market. SO my two favorite things combined: europe and flea markets. SCORE! Suprisingly it was an amazing market! I got a cute turquoise ring, about four cool pieces of art on delicate paper, and these vintage coins (both silver ones and gold) that I am going to use to make jewelry. One had Medusa on it (I’m really into the mythology) and another was some sort of cool soldier scene. Screw the 1,000 dollar necklaces I can make my own! I cruised around bouncing my eyes on to the typewriters, lace doilies, italian books, and other cute nick nacks I often see at the Rose Bowl Flea Market. Afterwards I got some delicious raspberry gelato which tasted SO similar to Haagen Daazs (my favorite ice cream brand at home) which furthermore convinced me that Haagen Daazs is truly the best. I mean it really is they even had Haagen Daasz icecream shops in Istanbul and other places, so Dreyers ain’t got nothin’ on it and neither does ColdStone. We continued to walk around and just explore the adorable city of Florence, our bruised feet sore from walked along the uneven cobbled streets as we watched for bike riders and heard their little chiming bells warning us to get out of the way. I saw so many old people on the bikes I was shocked! The boys and my dad climbed the Duomo which is this suuuper tall church (well they climbed a part of it) and got a gorgeous view of the city. My bruised feet were not up for the challenge, and neither were my mom’s nor Nancy and Nicoles’. Plus the fact that a girl fell down the first flight of stairs and hurt her ankle didn’t exactly encourage me to give it a shot.

For dinner that night I had homemade lasagna at a restaurant as well as amazing bruscetta and some more carpaccio. Yummy in my tum. Well the Levitts and Angels were in for a surprise from mother nature as we nibbled on our italian grubs and heard the first signs of a grumbling mother nature. Thunder, oh shit. Apparently the weather reports said it could be stormy tonight, of course we didn’t bother to bring umbrellas or other apropriate attire other than our tanks, shorts, and sandals. By five minutes it looked like somebody was turning the lights on and off in the sky because there was so much lightning and we were shaking in our wooden seats at each scary crash of the thunder. The rain cam crashing down and oh just our luck AGAIN it STARTED HAILING. HAILING!? Why?? I mean it was a laughing matter at this point because there was no way we were going to walk home in that. Did we?- you may ask. Well after praying that the man selling umbrellas on the side of the street would walk past our restaurant again, which he did, it was after we had spent about 40 euros on cheap, pastel colored ponchos and umbrellas that we knew we didn’t have another choice and DID walk home in the storm. Well, we probably DID have another option which woudl’ve been taking a taxi which probably would’ve even been cheaper than the frickin’ ponchos, but it was an experience. So with our hoods on we darted out of the restaurant and into the flood of rain being washed down the dirty street as it showered down on our heads. I was screaming and laughing as I ran down the street with my family and the Levitts. Only something like this would happen to US. Other locals were walking around in non-apropriate attire with smal umbrellas casually strolling around as if this was a usual thing and were probably amused by the frantic dots of pink, blue, and orange puffballs wobbling their way through the streets giggling and screaming. Somehow we made it back to our hotel, which was like a 20 minute walk from the restaurant and cozied up in our beds. It was an exciting day in Florence.’

TODAY, we went on a bike ride through Tuscany and it was gorgeous to say the least. Reminiscent of the basque countryside of France, it was a blur of greens and a beautiful clear blue sky. The vineyards lined the land and hints of lavender flowers popped up from beneath the fresh-smelling ground. We visited a castle built in the 1000’s and taste-tested olive oil and wine (chianti wine which is what they are known for her I’m assuming) They told us they are NOT known for their white wine though so don’t get white chianti. Afterwards we embarked on our real adventure, the biking. It was exhilarating and a bit nerve-racking to zip down the bumpy road while trying to enjoy the view and stay close to the right side of the street as cars sped by. The first part of the ride was nice except my hands were quite sore from breaking so often. I could smell the fresh green as the wind blew by and felt so relaxed by the gorgeous setting and sounds. It wasn’t until after our first stop and the continued bike ride that consisted of an incline and a gradually heating up sun that I started to sweat and complain. Okay, I’m not THAT athletic even though I was JV Field Hockey Co-Captain (yes, I’m pretty cool just kidding me and my co-captain were only made that because my coach felt bad that we were the only juniors on JV). So yes my thighs were burning and I didn’t like it and I’m not very comfortable on bikes that aren’t mine and my crotch was sore and the stupid girl in front of me was really athletic and not having trouble/complaining and it made me mad because I JUST WANTED to hear her like catch her breath or say ugh or something! Like it’s not easy being the tortoise of the group when everyone else is the hare who seems to have an unending amount of endurance. Jesus. So before the tough part I OBVIOUSLY quit kidding myself and ditched the bike for an air-conditioned van. Call me a wimp, call me a girl (which is gender steroetyping and not okay by the way) but I know my limits just like Nancy, Nicole, and my mom did as well. I was NOT gonna make it to the top in tears and start barfing like I did after my second field hockey practice of the summer going into sophmore year (yikes what a way to start the season who knew I’d made it to the top as captain and actually score goals the following year). So we left Tuscany and fell asleep in the van on the way back to Florence (at least Spencer, Ben, Nicole, my dad and me did) and headed back to All’antico Vinaio the sandwhich shop for another heavenly meal. Even though we had just had lunch with the biking company and I had a delicious creamy tomato sauce pasta. We walked around and headed back to the hotel to collect our luggage and now I am here, sitting on this train unfortunately a little gassy (hopefully nobody’s noticed) and eager to see if Rome really looks as great as it does in the Lizzie McGuire movie.

this one’s called ‘Massacre of the Babies’…. how nice

one of my personal faves 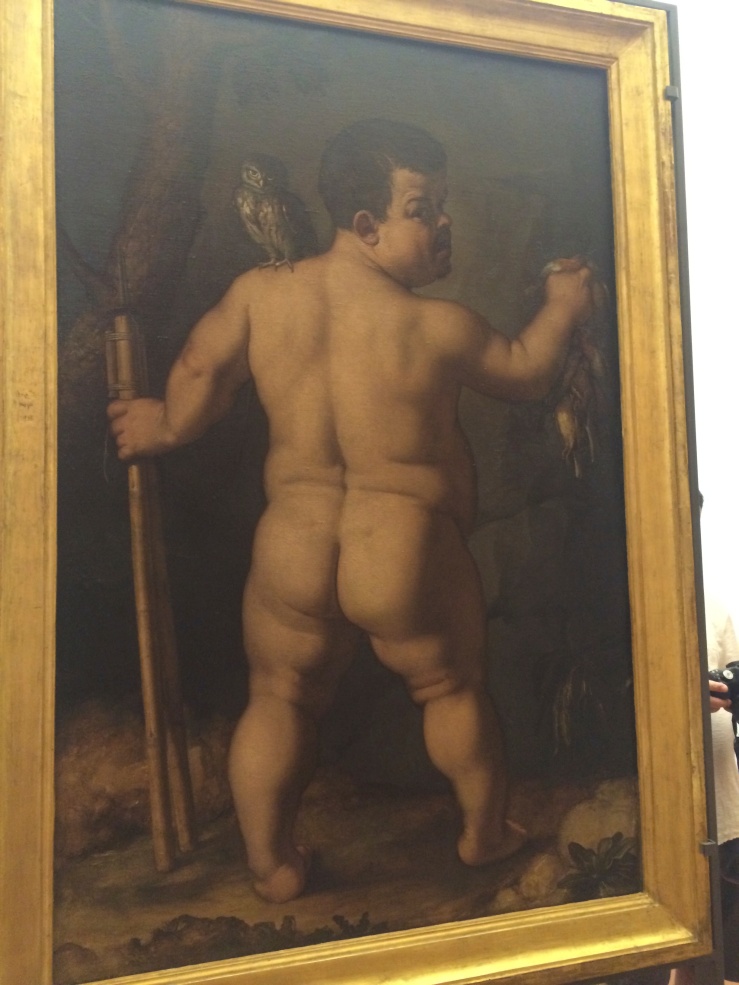 ooooh and baby got BACK! 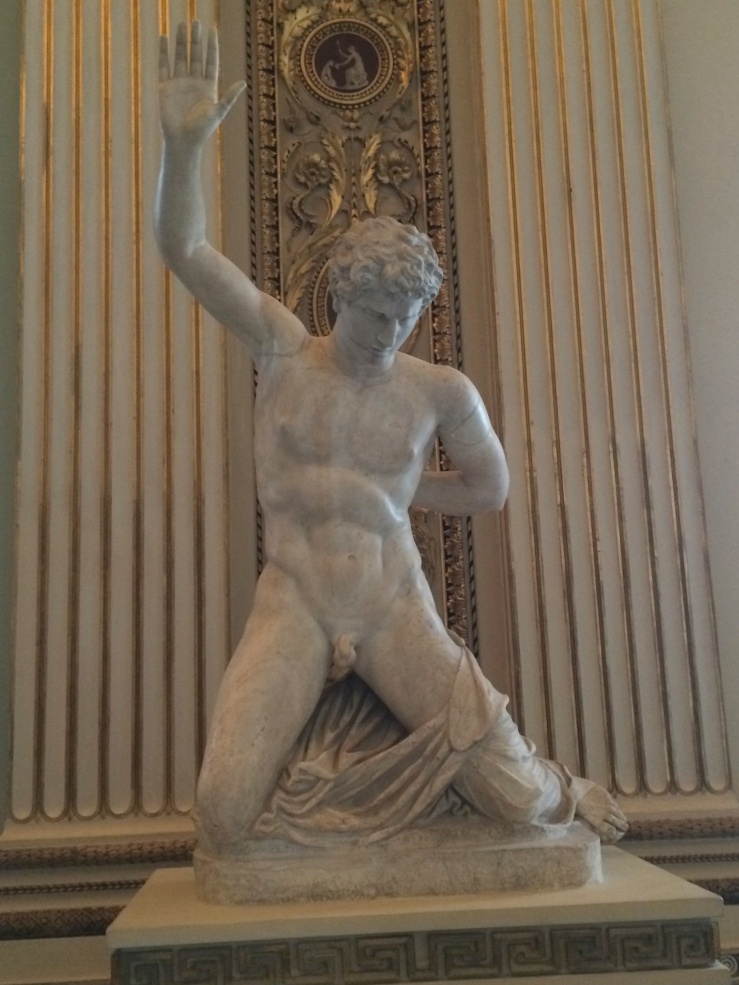 quite a “cheeky” stretch

if this lil’ bebe is thinking anything its this… : “mmmmm do i smell BISCUITS?” 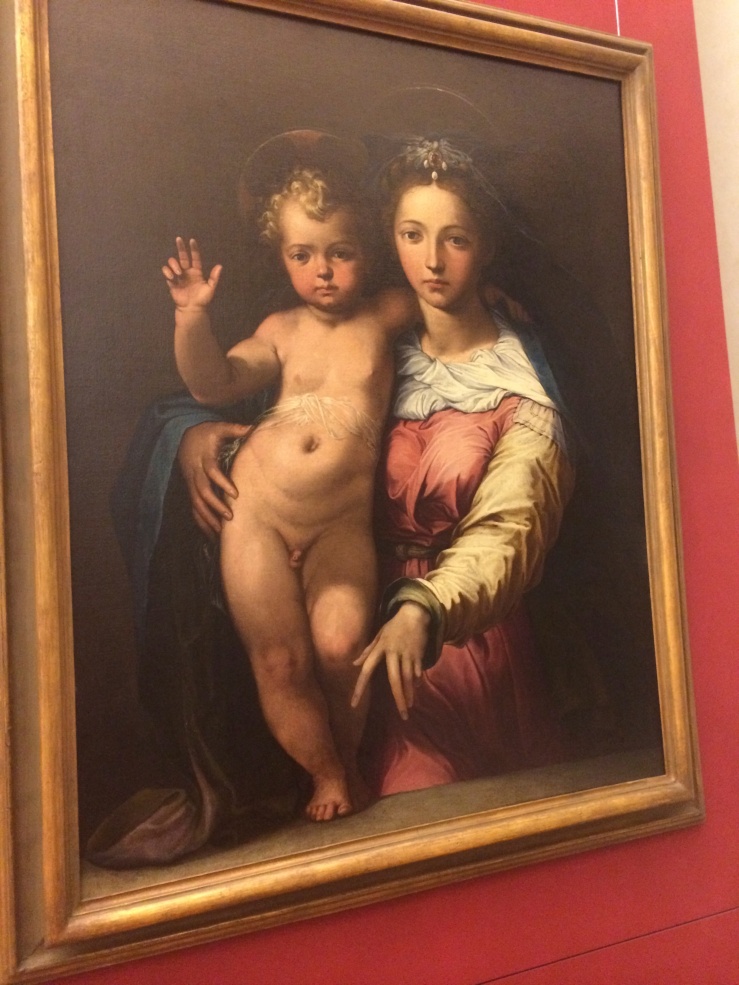 Jesus is always the sassiest of bebes! He’s like “talk to da hand girl!”

the BEST sandwich place in Florence; its honestly incredible

creeoy doll at the flea market 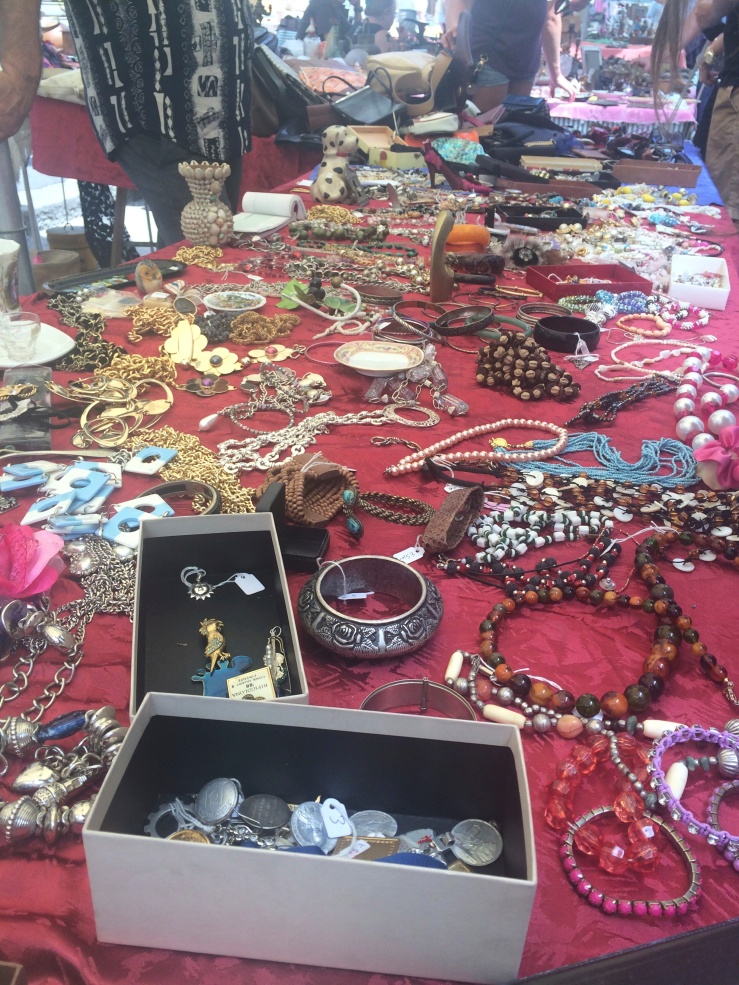 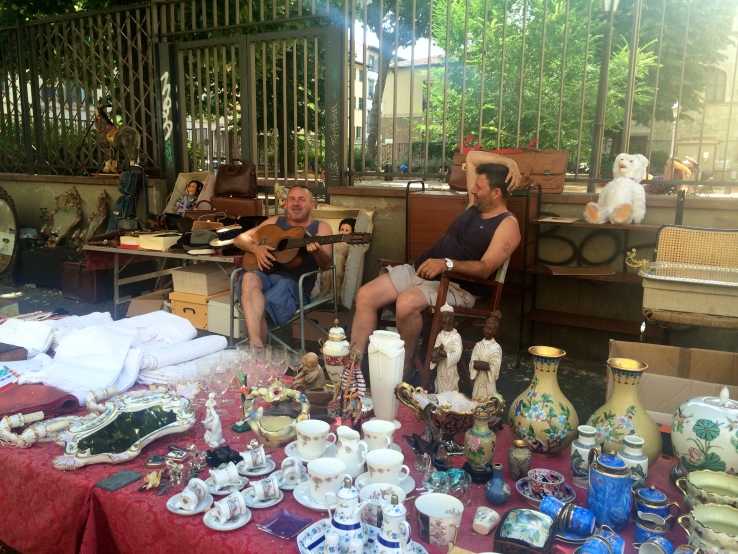 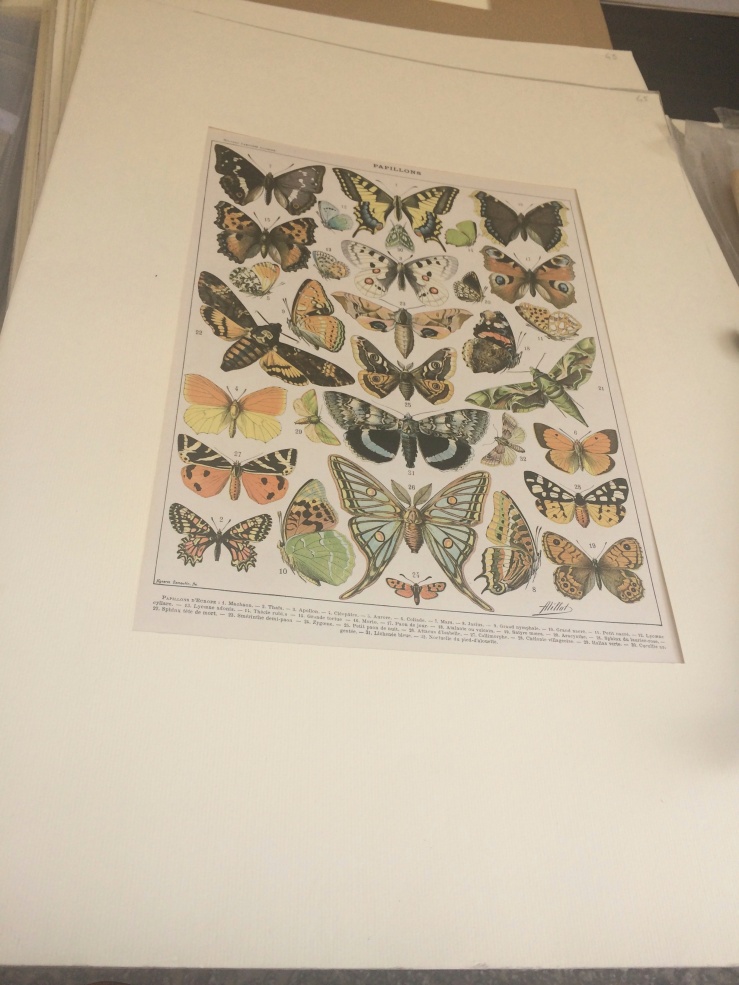 this is so cute

me in my poncho before we went out into the rain

Matt and Will posing in the rain 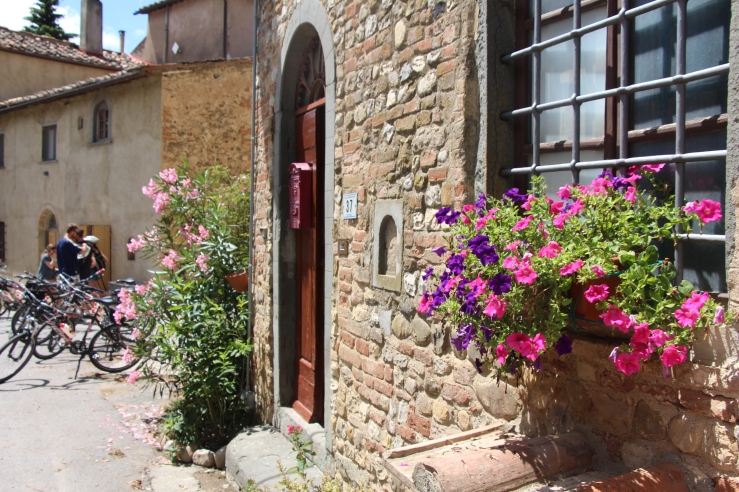 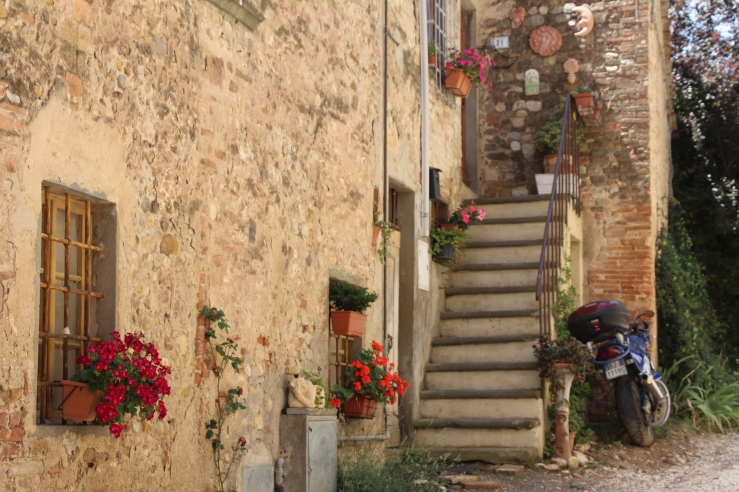 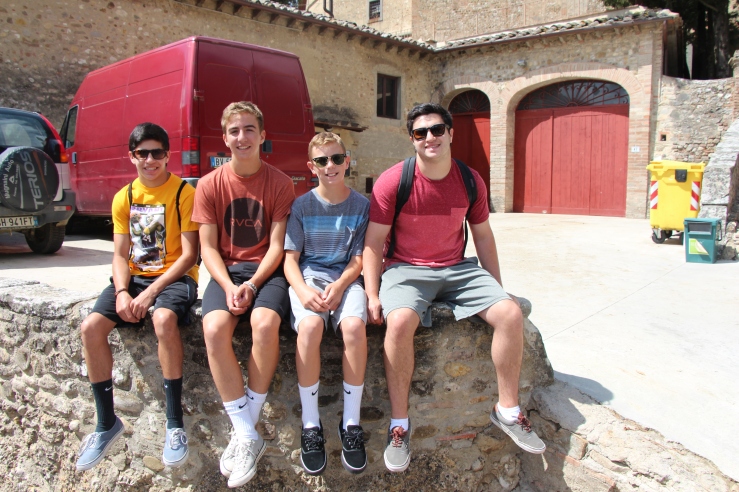 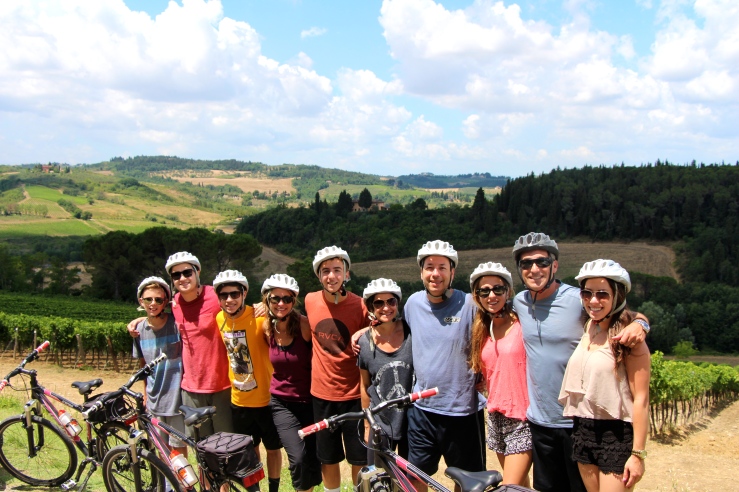 so the bike company’s got some really “eye-catching” shirts, right? 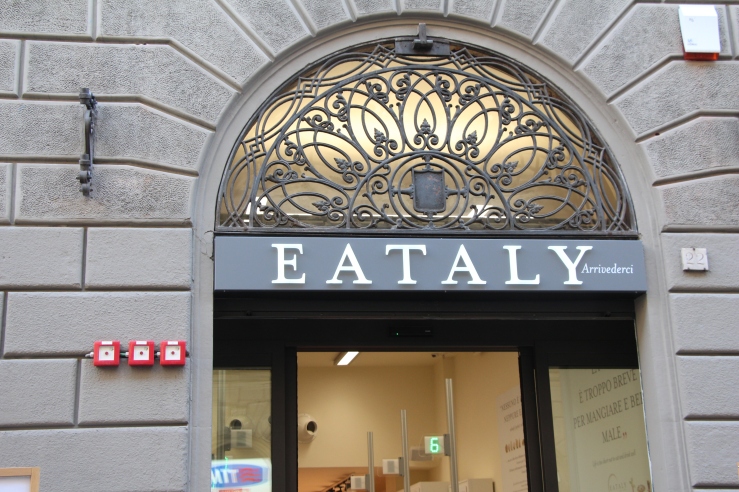 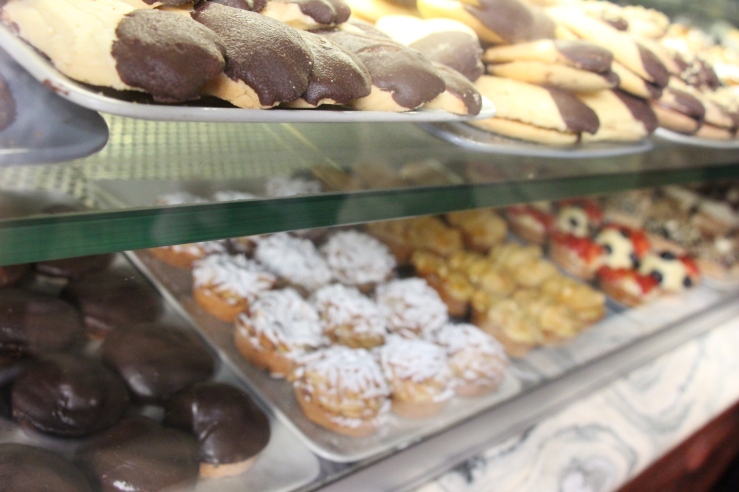 and yum… some dessert!